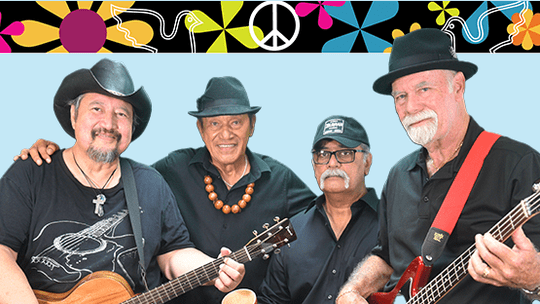 “The Way We Were, Music of the Love Generation” featuring Music and Stories of the Generation that changed America.

Blue Note Hawaii is proud to present for one night only, The Peter Apo Band “The Way We Were, Music of the Love Generation” featuring Music and Stories of the Generation that changed America. Audiences are in for a trip down memory lane featuring original tunes and classics by Bob Dylan, Peter, Paul & Mary, John Denver, Arlo Guthrie, Linda Ronstadt, Crosby, Stills, & Nash, The Eagles, The Byrds, Pete Seeger, The Beatles, and many more artists that have defined The Love Generation.

The Peter Apo Band, features guitarist Gordon Freitas, bassist, and tenor Jim Christian, drummer/percussionist Pete Moe and is fronted by Peter Apo with a decades-long career under his belt, Peter is an accomplished songwriter, singer, and musician. His recorded music is rooted in the folk-rock genre and his live performances roam the spectrum of folk, blues, standards, and Hawaiian.

Peter spent many years as a folk musician based in Los Angeles with the band The Travelers Three who toured the nation’s colleges and coffee houses for several years. They recorded 3 albums for the Elektra label and one for Capitol Records. After The Travelers Three disbanded, Peter returned to Hawai’i and in the latter ’80s began songwriting as a serious avocation. He also embarked on recording several solo albums.

This year, Peter Apo is excited to launch the next chapter of his career with The Peter Apo Band, going “Back To My Future” resurrecting songs of the Love Generation, while presenting new songs in a contemporary call for justice, peace, unity, and for the love of mankind.